When this protection is missing or flawed, serious personal injury or even death can result and you may be entitled to a compensation claim. If you're seriously ill, we can even offer home visits to you during this process, if required.

Some of the more common work related illnesses include:

Our specialist team of personal injury solicitors have over 45 years of experience with high value personal injury claims, so you'll be speaking to an expert and not just a claims manager. We can help with your personal injury claim

Sarah Sadler
You & Your Family

Accidents at Work in the UK - Recent Statistics

I am very grateful for all your efforts and a very satisfactory result. I cannot thank you enough for a first class service and I will happily recommend you to my friends and family.

I can not fault Mr Banner in any way for the work he did for me. He was friendly and professional and he managed the case to my benefit. Thank you.

I was involved in an accident and my insurance company thought they had achieved the world for me by getting an offer of 50/50. This offer would mean not only would I get 50% of the damage done to my car, but would also lose my no claims bonus. I went to Banner Jones with all the paperwork and just a few weeks later I was banking a cheque for the full amount of damages and had my no claims discount. Great Service! 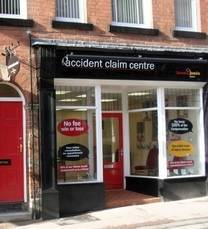 Why not drop in to our dedicated Accident Claim Centre on Glumangate in Chesterfield? You'll get a free, initial consultation and it's no appointment necessary. Additionally, we work on a no win, no fee basis.

Alternatively, to see whether you have a claim, contact our expert Personal Injury solicitors for a no obligation chat on 0330 017 6306* or email claims@bannerjones.co.uk.

We take data privacy very seriously, and we want you to understand and feel confident about how we collect, store and handle your personal data. If you’d like to find out more you can read our Privacy Policy.